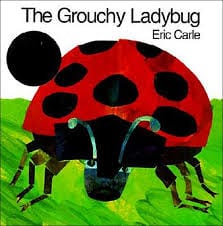 May Book – The Grouchy Ladybug

Intro to book (predicting)
Before opening the book explain that Eric Carle was the author and illustrator. Some children might remember him from some of the other stories we’ve read. Look at the picture of the ladybug on the cover. Have each child tell you one color that they see on him. What shape is it? How many legs does it have? Do they know the name for the two long, curved lines that are sticking out above the ladybug’s eye (antennae or feelers)? What do they notice about the spots (same number on each side)?
Ask: how would you describe the ladybug’s face? What kind of mood does it seem to be in? Then ask the questions like: Why do you think the ladybug would be grouchy? Do you know where ladybugs live? Where do you think the ladybug in this story might live? Then go through the book and look at the different kinds of animals and see if anyone can guess, now, why the ladybug is grouchy.
Turn to the title page and reread the book title and name of author/illustrator. Invite children to describe the ladybug on the page. Ask: do you think it is the same ladybug that appeared on the front cover? What details make you think that? (red shell, black dots, purplish head, six brown legs). Ask: how is the picture of this ladybug different from the one on the cover? (visible blue wings, view from above instead of ground level).
Read the dedication page. Ask: why do you think the author dedicated the book to ladybugs? Encourage the children to name other ways that animals help people. Record their responses (pets keep people company, guide dogs aid the blind, cows give us milk).
Then read through the book together. Compare predictions.

Identifying animal features
Encourage children to describe the features of the animal appearing in each illustration and point out picture details such as the animal’s color, shape, and size. Help children find the feature highlighted in the text (yellow jacket’s stinger, etc) help children realize that the size of the animal becomes progressively larger as the story continues.

Animal defenses
After talking about how each animal defended itself, pick a different animal and write a new page for the story (e.g. at ten o’clock it met a porcupine. “Hey you,” said the grouchy ladybug. “Want to fight?” “If you insist”, said the porcupine, pointing its long sharp quills. “Oh, you’re not big enough”, said the grouchy ladybug and flew off.). Other ideas: owl/sharp claws, rattlesnake/poisonous fangs, chameleon/changes colors, horse/sharp hooves and teeth.
Grouchy and friendly faces
Invite each child to choose a favorite animal. Ask them to draw two pictures of the animal: one that is grouchy and one that is friendly.

Talking about ladybugs
Invite children to tell what they know about ladybugs. What do they look like? Where can they be found? What do they eat? How do they move? Encourage children who have seen a ladybug to describe in detail what the ladybug was doing. Tell the children that the book they are about to read tells about an unusual ladybug.

Understanding grouchiness
Write the word “grouchy” on the dry erase board. Ask children to explain what the word means, or describe grouchy characters. Help children make a list of synonyms for grouchy (whiny, complaining, grumpy, etc.) tell the children to watch for a character who is grouchy in the story. You can sing the song “If you’re happy and you know it”, including other feelings (e.g. mad/shout “I’m mad!”, silly/give a giggle, etc.)

Links (Counting)
As you read through the story, each time you come to a different animal, add an additional link. Count up the links each time and at the end of the story.
What would they eat? (classifying/habitats/charting)
Read the book. Ask, Do you know what kind of food each animal eats? Chart results. Another day you can ask where each animal lives and chart results.

Language arts
Make a language board: I feel grouchy when __________
OR: When I’m grouchy I ________ (describe how they act). Also, you can discuss alternatives (when you’re grouchy because someone takes your toy you can _______.
OR: when someone’s grouchy I _____. Talk about how to cope when a friend, parent, etc is grouchy. What do they do when a friend doesn’t want to play with them? Does that mean the friend doesn’t like them anymore, or could it be that the friend is grouchy? You could combine this with the children drawing pictures and the teacher writing their dictation.

If you were a ladybug (feelings/dictation)
Ask the children, were they a ladybug, where would they like to live. Who would be their friends? What would they eat? What would their name be? Do ladybugs have names? Would they be a grouchy ladybug or a friendly ladybug?

Survey says… (graphing/feelings)
Graph which animals in the book are favorite. Put two animals on a chart. The children can use a beanbag to “vote” with. You can also put two animals on the chart and ask them to put their beanbag by the biggest animal, smallest, etc. Discuss which animals are the most/least/no one liked (zero).
OR: Chart different emotions the children can think of. Put two emotions on a chart. The children can use beanbags to “vote” with. Compare emotions that are opposite, but, also ones that are not (e.g. would you rather be sad or angry?).

Who am i? (DP/Observing)
Children take turns imitating animals from the book. Have the other children try to guess what animal they are imitating.

Animal pictures (imagination/dictation)
Have the children draw a picture of their favorite part or favorite animal in the book. Have them tell you about it and write their dictation of the bottom of the page.

Act it out (DP)
Read through the story. Have the children, as a group, act out the defense action on each page.

Put up your dukes! (listening)
Ask the children to listen to the story and when they hear “Want to fight?” they are to put up their dukes. When you read “oh, you’re not big enough”, they will shake their heads.

Alphabet soup (letter recognition
Teacher spreads out foam letters in the middle of the circle. Tell them, It’s soup…alphabet soup. Draw words from the story on dry erase board. Have the children take turns finding each letter.

Helping you to help your child lead their best life!

You love your child...call now!