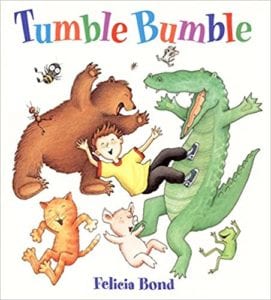 This month in our kindergarten readiness time, we are reading Tumble Bumble by Felicia Bond. In this book, a tiny bug goes for a walk, but it’s no ordinary stroll. He bumps into a cat, then a crocodile, and even a baby pig. In this charming cumulative tale, the children will go on a rhythmic adventure that counts new friends up to ten.

What do you think? (classifying/feelings)
The group will read the book together. At the title page, the teacher will ask what they think the little bug is doing. Where do they think it is going? Do they think it is lost? She will ask the children if they have ever thought they were lost and how did they feel.

Families (social)
The teacher will ask the children where they think the boy’s mother and father are. Do they think he has brothers or sisters? If so, where are they? The group will discuss each child’s living arrangements, noting diversity, accepting every configuration.

The teacher will talk about the different ways that the animals in the book help people in real life. For example: bug: eats other bugs that harm crops or homes; cat: keeps homes free of rats & mice; bee: pollinates flowers, fruits & vegetables, makes honey; spider: eats grasshoppers that harm crops. The teacher will discuss the importance of respecting the animals’ natural habitats and not destroying their homes.

Links (Counting)
As the teacher reads the book, she will link plastic links together each time she comes to a different animal. The group will count the links each time one is added and at the end of the story.

Animals as pets (classifying/animal habitats)
As the group looks through the book, the teacher will have the children look at the animal on each page and ask if someone gave them that animal for a pet, would they keep it. What would they feed it? What would they want to do with the animal? After going through the whole book, the teacher will have each child pick the one animal that they would like to have as their pet.

Discovering How Animals Move
The teacher will reread the book to discover words that describe how each animal moves. When she comes to a sentence with words describing movement, such as: bumped/jig/ bounced/zigging/zagging/tippy-toeing and tumble bumble, she will encourage the children to call it out loudly.

Talking with Children (Observing)
The teacher will reread the book and ask the children to describe what is happening in each picture. She will ask questions such as:
In each picture, which animals are bigger? Which are smaller?
How do the animals look when they are dancing? How do they look when they are eating?
Which animals are the same colors or nearly the same color?
Which pictures are your favorites? Why?
Which two animals were the first to meet?
Why did the baby pig squeal loudly?
What did the animals do inside the house?
How many friends were there in all? Can you name them? (10: bug/cat/crocodile/ bee/pig/toad/mouse/spider/bear/boy)

Focusing on Fun
The teacher will ask children if they think it is fun to have a pet. She will ask them what type of fun children can have with an animal. The teacher will encourage them to share about the fun that they have had with pets.

Alphabet Soup (letter recognition)
The teacher will spread out foam letters in the middle of the circle. She will explain to the group that it’s soup…alphabet soup. She will write a word from the story, name it and each letter in it. The children will take turns finding each letter.

Who said it (listening)
The teacher will record the children reading the story, having each child read a page. The group will then listen to the recording and guess who said it.

Language Arts: Crocodile song
The teacher will read the section of the book when the crocodile sings a song to the pig. She will ask the children to write a song that the crocodile might sing to the baby pig. They may take a popular tune such as “Twinkle, Twinkle Little Star”, and write new words to it. The song might tell how sorry the crocodile is for stepping on the pig’s tail. Later, the teacher will invite some of the children to perform their songs for others.

Language Arts: Bug and Cat Chat
The book reads that the tiny bug stopped to talk to a cat, but it does not tell what they said to one another. The teacher will invite the children to create a conversation for the bug and the cat.

Animals (science)
The teacher will list the types of animals in the story. She will explain that scientists group animals in special ways (cats and bears are mammals, toads are amphibians). She will make a chart showing mammals (cat/pig/mouse/bear/human), insects (bug/bee), reptiles (crocodile), and amphibians (frog).

You love your child...call now!