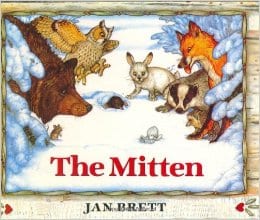 This month in our kindergarten readiness time, we are reading The Mitten by Jan Brett. This story was adapted from a Ukrainian folktale. The story centers on a white mitten dropped in the snow by a boy named Nikki, who’s Grandmother had knitted the mittens especially for him. This Mitten becomes a refuge for a series of increasingly large woodland animals until the bear sneezes!

Intro to book (predicting)
Before the teacher opens the book, she will tell the children the title and author. She will explain what a woodland animal is and ask what woodland animals are in the picture. What else do they see? Without showing the children the inside of the book, she will ask what they think the book is going to be about. She will record predictions, using the child’s initials to show who said what. She will also ask what do they think will happen to the mitten? She will begin turning through the pages, without reading them. She will see if the children have any new predictions.
OR:
The teacher will ask the children if they have ever been in a snowy forest. Which kinds of trees have leaves in the winter? Which animals did they see there? She will make a list of the animals on a chart.

Warm-blooded Animals (science)
The teacher will ask how the children think woodland animals can survive during a cold winter. She will explain many of these animals are warm-blooded; that means that these animals have to try to keep their bodies at same temperature no matter how cold the air is outside. The group will discuss ways the animals might keep warm. She will explain that woodland animals are able to adapt to the changing seasons (birds grow heavy, thicker feathers; bears, foxes and rabbits grow thicker fur; bears hibernate. They also find warm places to stay.)

Observation
The teacher will read the book aloud and have the children describe what is happening in each picture. She will ask them to pay particular attention to the way each animal looks. She will encourage descriptive details: The owl has sharp claws, brown feathers, and big eyes. The fox has red fur, sharp claws, and a bushy tail.

Animal Defenses (science)
After the teacher reads the story to the children, they will go back and look at each animal. She will ask them to guess how each animal could protect itself from their enemies. They will discuss the advantages/disadvantages of size, color, body parts. The teacher will make a chart. Mole – small size, fast runner. Rabbit – “big kickers”, fast runner, white color. Hedgehog – “prickles”. Owl – “glinty talons”. Badger – “diggers”. Fox – “shiny teeth”, sharp claws. Bear – big size, sharp claws. Mouse – small size, fast runner.

Discovering How Animals Move (language)
As the teacher reads the book aloud, the group will seek out to discover words that tell how each animal moves. When they come to a sentence with one of these words, such as, “A snowshoe rabbit came hopping by”, or “A hedgehog came snuffling along”, the teacher will encourage children to call it out loudly. She could make a list.

Making Your Own Mitten (science)
The teacher will draw a large mitten on butcher paper. She will give the children pictures (cut out by the teacher ahead of time) from magazines such as National Geographic. Using glue sticks, the children will glue animals “into” the mitten. The group will look at and discuss which animals live in each mitten.
OR
The teacher will give each child a white construction paper mitten. She will have the children color their own special design on the mitten. They will talk about the colors that they use and how their mitten would not get lost in the snow because it is not white any more. The teacher can extend the idea by talking about camouflage and how they could color their mitten if they wanted it to match the carpet, the tan bark, the wall, etc.

How Many Animals will fit in a Latex Glove (hypothesis/math/charting)
The teacher will make a chart of how many animals the children think will fit into a latex glove. They will then put animals (sorters would probably work best) in glove one at a time.

Animal Adding & Subtracting (math)
As the group reads the book, the teacher will have a child stand to represent an animal being added to the mitten. The group will count the animals each time another is added. At the end of the story, the teacher will ask how many animals would there be if the bear and hedgehog left? What if 2 squirrels came? Etc.

What do you think? (feelings)
Reading the book aloud to the group, the teacher will ask how the children think Nicki might have felt when he realized his mitten was lost. How might his grandmother’s warnings affect him? The teacher will encourage children to share their own experiences when they have lost something. How did they feel? What happened to them because of it? If they found the lost item, what did it look like? How did they feel then?

Story in the mitten pictures (observation)
Information about Nicki and the animas can be found in the mitten-shaped picture on each page. The teacher will ask the children to carefully look at these pictures and describe what is happening. What is Nicki doing while the animals are in his mitten? Does Nicki see the animals? What do the pictures of the mittens foretell about each following page?

Who said it (listening)
The teacher will record the children reading the story, having each child reads a page.

It weighs how much? (observing/weighing)
The teacher and the children will read the book together. Using scales and forest animal sets, the teacher will have one child put a certain number of animals on one side of the scales. She will then have another child try to balance the scale by placing animals on the other side. Everyone will get a turn.

Drawing (imagination/dictation)
On paper, the teacher will have the children draw a picture of their favorite part of the book or favorite animal in the book. She will then have them tell her about it and write their dictation on the bottom of the page.

Dramatization
The teacher will have children pretend to be an animal from the story. The other children will guess who they are imitating.

Who Am I? (language)
The teacher will have the children describe the way an animal looks with 3 clues (and the teacher’s help). The other children will guess who the mystery animal is.

Real/Pretend
The teacher will ask the children do they think the story is real or is it pretend. Would animals get that close to each other? Are there any two animals that would get close to each other? Could a mitten really get large enough to hold all of those animals, let alone even one of them? Why or why not?

Families (social)
Nicki lives with his grandmother. The teacher will ask the children where they think his mother and father are. Do they think he has brothers or sisters? Where are they? Then, as a group, they will discuss each child’s living arrangements, noting diversity and accepting every configuration.

Writing a new Folktale (language)
The teacher will choose a new setting and have the children make up a new story (i.e. Manuel, of the South American jungle, has lost his sack, and different animals move into it. Where did he get the sack? What color sack could easily get lost in a jungle? What animals might get into the sack (snake, turtle, alligator, monkey, and piranha)? What might happen to cause the animals to scatter (mosquito, fly, or butterfly comes along)?

Animal Sorters (sorting)
The teacher will put 20-30 animal sorters in a container with a lid. She will shake, shake and shake the sorters. She will roll them out on the floor. The children will scramble to sort. They can sort by animal and then sort by color.

Clapping hands (listening)
The teacher will ask the children to listen to the story. When they hear “mitten”, they are to clap their hands. She will encourage the children to share the clues they used to help them know when to clap.

Alphabet Soup (letter recognition)
The teacher will spread out I-P foam letters in the middle of the circle and explain to the children that it’s soup…alphabet soup. The teacher will draw a letter on paper, name it, and ask the child to find that letter in the soup.

Recognizing Site Words
The teacher will write “mitten” in large print on paper. As the teacher reads the story aloud, she won’t read the word “mitten.” Instead, she will hold up the written word, pausing for the children to yell out “mitten.” (Variation: the teacher could announce what volume of voice they are going to use on each page).

*Home Activities- Talk to your child about the differences between zoo, farm and woodland animals and how they use their unique body parts to get in the Mitten!